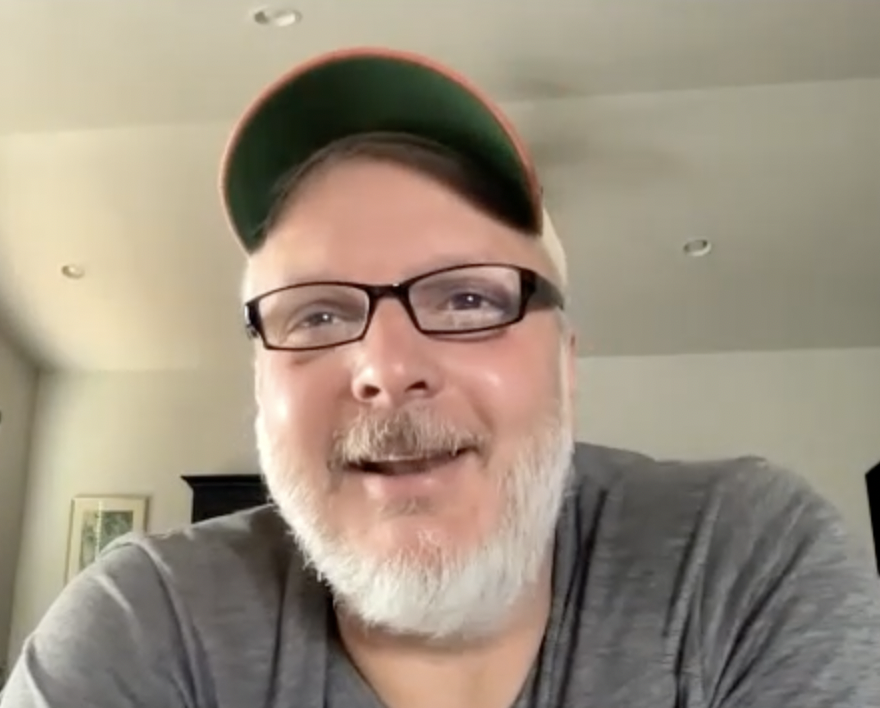 LE: What first made you interested in critical zone science as a geoscientist in particular?

CR: Good question. Well, it turns out that I’m old enough that I was around when this whole thing first started. I was actually a postdoc at the University of California Berkeley and there was a working group that was being convened about trying to study Earth's weathering engine. So it's this idea that when bedrock at depth underneath the surface is exposed to meteoric fluids, the minerals within it start to react with those fluids and they start to break down. And the idea is that as the surface erodes away from the top, minerals that are at depth are exhumed to the surface - the surface is removed - so the minerals get closer and closer to the surface as erosion removes material from the surface. So this weathering was conceived as a conveyor belt, or an engine where material is put in the bottom as fresh rock through erosion, it’s exhumed to the surface and it's exposed to all these meteoric fluids,and it breaks down and causes weathering.

This working group was convened to come up with a vision for study in the future. It was an effort that was conceived as something that would be seed for new National Science Foundation money to study Earth’s weathering engine, and I believe the group was called the Weathering System Science Group at the time.They realized that their name didn't really have traction - it wasn’t sticky. And it was around that time when they realized that the area they were studying is critical to so many things: to life at the surface, as we know, and also to human resource use as well. We live at the surface. And so knowing about this weathering engine is something that's important for a lot of different things, and that's when they coined this phrase “critical zone science”.

As it turns out, I was already studying Earth’s weathering engine, so you know, I just kind of got on the bandwagon. But I think in the end, it became much more than just studying Earth’s weathering engine. As we see it in its current state in 2022, the critical zone research effort has evolved into something that includes much more than just the weathering of rock at depth: for example, the accumulations of dust and recognizing how important they are to this critical zone and how the ecosystem functions. So it’s grown to include many more things, and I feel like I’ve always been really interested in bigger connections, not just the weathering itself, but how it ties into life at the surface. So I’ve always had an interest in transdisciplinary work that the critical zone now encompasses. So it was kind of a natural thing for me to just fall into this work with people who were studying weathering, and recognizing the importance of life at the surface and the weathering process. It’s a fun area to be in. It's at the interface between different disciplines and that's always exciting.It seems like the place where really interesting and transformative science is happening, and it’s just a fun area to work in.

LE: I know that something that’s on a lot of people’s minds right now is the climate. What role can critical zone science play in climate solutions? And how does the climate specifically connect to the BCZN’s work?

CR: Well, the critical zone extends from the tip of trees down to unweathered rock, and it encompasses this layer that’s kind of the breathing skin of Earth. It’s the place where plants are taking in CO2 and releasing oxygen, so it plays a major role in moderating climate. Studying the processes that influence life at the surface and how they interact with processes at depth ultimately comes with this sort of understanding that as we learn more about how these processes work, we’ll have a better understanding of how this critical zone interacts with our atmosphere and thus influences the climate. In the broad scheme of things, in a broad brush stroke, working on critical zone science is important to understanding our climate and how it responds to perturbations through time. So at a fundamental level, I think critical zone science is key to understanding these things.

More specifically in our [BCZN’s] work, we’re trying to understand how this fresh material [bedrock] is converted to weathered material and how these processes ultimately influence life at the surface. In the end, what we’re trying to do is very basic science; we’re trying to understand why weathering is deeper over there and less deep over there, and why it’s more intense there versus here. These are very basic science questions. They aren’t really necessarily motivated by specific applications like climate change solutions. But in the end, because we’re working on this layer that’s so vital - this breathing skin - understanding those things actually does have climate applications. So I’ll give you an example of work that we’re doing as part of this project and an extension of work that I’ve been doing for some years now. We’re recognizing how this vital role of differences in bedrock composition is influencing the growth of forests. So for example, rock types that have more phosphorus in them - phosphorus is a plant essential nutrient - rocks types that have more of it have denser forests growing on them. Also, rock surfaces that have deeper weathering profiles have more porosity in the subsurface. Weathering causes the opening of porous spaces in the subsurfaces that hold life sustaining water, so it makes sense that forests growing on more weathered substrates, with more porosity, more water hold capacity, those places have more forest growth, faster forest growth. So ultimately, the rocks are driving the life at the surface, and it turns out we’ve now discovered that in response to this recent epic drought in California from 2011-2017, we found that the die back of the forest that resulted from that drought is actually also tied to differences in bedrock composition. So the places that had more trees, when the drought hit, were less resilient to the drought, and we see more death in those areas. The idea is that the trees grow really well during wet periods because there’s a lot of moisture in the subsurface, but when there’s a drought, because you have so many trees, they’re unable to live through the drought, and they start experiencing drought stress and die back sooner than places that have fewer trees. So it’s kind of a boom-bust cycle where the areas with thick weathering profiles that have denser forests grow very well during wet periods, but then they outgrow themselves. When droughts happen, there’s too many trees - too many straws in the cup drawing up too much water from the ground. And those are the forests that end up suffering the most. So there’s this really cool connection that starts with the bedrock composition and ultimately it leads to an understanding of what’s controlling the distribution of forest death after droughts.

Now that, of course, has some management implications, right? If you can predict where the forests are going to be more affected, then you can start to manage those forests, right? For example, by cutting back on the fuel loading in those forests, so that when the next drought hits you have less mortality, and when you have less mortality, that means less fire risk. We’ve all heard about these epic fires that are resulting from the epic drought. The drought fueled these fires by creating dry tinder everywhere. If you can cut back on some of that die back by having a predictive understanding of where the die back is going to be greatest, you’re starting to manage the ecosystem for climate changes that are affecting it. You’re making it so that it’s more resilient against those climate changes, and you’re making it so that there’s less impact to humans as well. These fires have had a devastating impact on the US West, so there are ultimately links and we are studying those links too. We’re very interested in those connections between the bedrock and the vegetation at the surface. I think our work very directly deals with one of the major challenges of the 21st century, and it’s the challenge of “How do you manage forests in a changing climate?”

LE: Switching gears a little bit, you are a leader of our team, and I’m sure there are a lot of reasons that you like it, but what is your favorite part of leading the BCZN team?

CR: You know, leading is a new thing for me. I’ve mostly worked as an individual researcher. I’ve been a part of these large Critical Zone Observatory projects in the past, and I’ve always been a team member and tried to work with my teammates. But in the end I’ve never played a really strong leadership role in any of that. Over the years, working with these large groups of diverse scientists spanning multiple disciplines, I was able to gain insight into how those groups work together. And so I think that experience has prepared me to potentially be a good leader of this group. Being able to take some of that knowledge from my own training and experience over the years and pay it back to the people on my team, and also the other teams at other institutions, is a thing that you have to step up and do, and I do enjoy it. I think it’s rewarding to be able to take that experience and pay it back.

LE: So who is someone on our team [the Bedrock cluster] that you admire, and why?

CR: Well I don’t want to weasel out of this one, but I can’t pick a single person, I really can’t. In our team, we call ourselves a dream team, and there’s several layers to that. One of them is that disciplinarily, we span a really wide range of things, and it’s a perfect range to cover the kinds of questions we’re trying to ask in our project, so it’s a dream team in that respect. It’s also a dream team in the sense that we work well together. A lot of us have known each other for many years, and have been working together for many years, and so there’s a collegiality there that is really exceptional. When it comes to projects like this, it’s hard to imagine a better group of people to work with. It’s really hard for me to pick one individual; I’d rather just say that I really admire that we pulled together this dream team and that we work so well together.

LE: You’ve worked in this field for so long! What keeps you studying critical zone science after all these years?

CR: There’s always something new to learn, right? And our understanding just keeps getting deeper, and it leads to new questions. And that, for me, that’s what keeps me going, you know? I’m learning something new every day. There’s always a reason to explore a new branch of literature that I never would have otherwise considered if I were in some other discipline. I think you can be kind of pigeon holded in the geosciences into some very specific areas. But when you’re working on the critical zone, you really need to broaden your base and have a broad understanding of many different things. That’s really exciting to me - knowing that I’m going to learn something new every day.