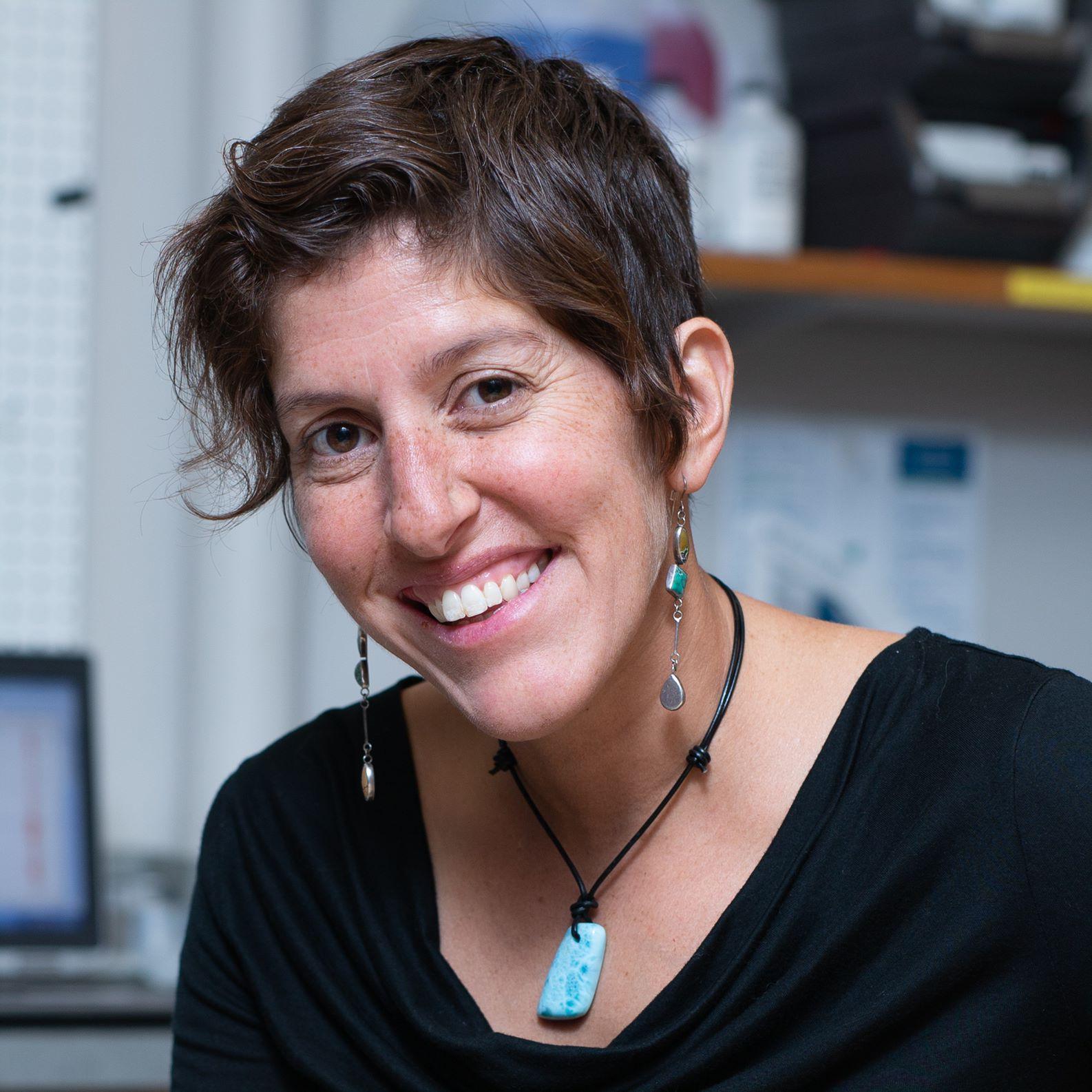 My name is Kamini Singha. I'm a Professor at the Colorado School of Mines. I'm also the Associate Dean of Earth and Society Programs. I'm a hydrogeologist and an environmental geophysicist. I was raised in New England, and have always liked the outdoors, even before I jumped out of a tree with an umbrella pretending to be Mary Poppins.

Let's start with a really easy question, which is, what is your path to critical zone science? Where did that begin? How did that happen for you? And how did it get you to where you are?

I'm going to go back way back. I thought that I would be an English major coming out of high school. I was the editor of my high school literary magazine and I loved writing poetry, but my focus changed my senior year when I had this physics teacher who just made physics super cool and really fun. So I started to think about physics as a thing. And my parents had a friend who was a geology professor who was talking to me about my physics homework. I can’t remember - I think he must have been over for dinner - and I was struggling with torque. And he said “oh, if you like physics, you should think about geophysics”. I am probably one of the only seventeen-year olds who had an exposure to someone who said they should be a geophysicist. I thought that sounded cool, so I started my freshman year as a geophysics major at a university that had a separate track for geophysicists, and I stuck with it the whole way through.

I then got a job with the U.S. Geological Survey, which changed everything. I was basically a field technician for them, so I just got sent off to places to do whatever they needed me to do. But it made me psyched about science, and made me think maybe I should go to grad school.

And then I went to grad school, and in my first year I realized that geophysics was not what I wanted to do, that a lot of geophysics is taught where you learn a tool or a method, but there's not like a piece of the Earth that is necessarily yours. And I wanted a piece of the Earth to be mine, so I fell into hydrology. Hydrogeophysics didn't exist as a word yet, but I ended up in hydrogeophysics for my Ph.D. I finished the PhD and got a job at Penn State, which was super lucky. The geosciences department is a great department, and Sue Brantley was one of my mentors. Of course, she was one of the founding humans of critical zone science, and I remember her asking me if I'd heard of it, and I had said, no. But I started right around the time they were submitting the first proposal for the Shale Hills Critical Zone Observatory, so she included me. That's sort of how I got pulled in, and what I liked about CZ science was that it got all these different people from Earth and environmental science in the same room. I thought it was super exciting because so many things we do are so focused on one area of science. So I thank Sue for my interest in critical zone science.

We talk a lot about how critical zone science requires an immense amount of collaboration. What do you feel like your lane is in the CZ science world? And then what does collaboration outside of that lane look like for you?

My lane changes depending on the group of people I’m with. I know that is the case for other scientists that are between disciplines like I am. In a room full of hydrologists, I'm always the geophysicist, but in a room full of geophysicists, I’m always the hydrologist. That said,I think of myself more as a hydrologist than a geophysicist. I use geophysical tools and can speak that language, and understand the big picture details of geophysics in terms of data collection and analysis and inversion. But I’m not pushing the envelope in that area. I see myself as sort of a user of those tools, but most of my work and the interesting questions that I feel like I've made contributions to have all been hydrologically based rather than geophysically based.

The upside of being in between disciplines is that if you can speak both languages, you end up in both rooms. Hydrologists that are interested in geophysics often ask me questions about it because I know the language of both fields well enough that I can tell a hydrologist what they need to know about some method to move forward with it. I again credit my time at the USGS because that was what they did. Tech transfer work was a big deal.

What does collaboration with other fields look like outside of hydrology and geophysics?

I have been pulled throughout my career by colleagues into varying research areas that I never saw myself going. One of those places is related to the critical zone coordination network that you're part of, which is that I never saw myself working on trees. It was the part of the water cycle that I had ignored my entire career to date. It was in conversation with Holly Barnard about ten years ago that I first got interested. I was talking about this data set I had where I was collecting electrical data perpendicular to a stream where we were running tracer tests, and we were looking at the extent of groundwater-surface water exchange using these geophysical data.

There were two watersheds, one of which had a ton of near stream vegetation, and the other one did not. A super common problem in electrical geophysics is that there are temperature dependences. I was trying to temperature correct these data, and in the system without riparian vegetation, when we corrected the temperature, our conductivity flatlined out in the way we would expect. But in the system with riparian vegetation I still had these cycles and Holly says to me “I bet you're seeing the trees”. She convinced me that this was really cool, and so we wrote a grant together that got funded. Since that time I've been working on plant and tree-based systems with her and some other people, like Pam Sullivan. When I started at Penn State there was a really wonderful plant physiologist at Penn State named Dave Eissenstat. I remember the first time he showed me images of the xylem of trees - the living part of the tree that moves water from roots out the leaves. He showed me these two different species - one looked just like porous media, and one looked just like fractured rock. And the math that they use to describe flow and transport through those two different xylem systems is the same equations that we use in hydrology for porous media versus fractured rock.

Collaboration for me has always been organic, whether or not I run into someone and connect with them. I'm in a place in my career where I just want to work with people that I think are interesting and doing good work, and I enjoy being around. That’s also been really nice - that mostly I’m on projects where I feel like I'm getting to work with really awesome people that I wouldn't get to engage with otherwise. The farther afield I am from someone, the more I have to learn. I'm in a project right now that's a root-based project and, wow, there is language that I don't know anything about. That's what the challenge and the strength of CZ science, I think.

What is something about this CZCN project that you find cool and special? Because everyone I've talked to seems to have the same sentiment that, like we're part of a really awesome thing.

I think this project is interesting for a variety of reasons. Maybe the thing I find most special about it is that as someone who’s had a career in geophysics, there's always been a sense in the hydrology community, and probably related communities that are in critical zone science, that geophysics isn't contributing that much to our understanding of systems. This project is probably the first time where I've seen people in other disciplinary areas get really excited about what you can do with geophysics, and that is in part the scale of data collection that this project is doing. We’re collecting data on much longer lines and looking much deeper than most people do in surface-based applications, and so that vision of the subsurface we get from those data means that people from other disciplines can finally kind of see what we see.

I think a lot of times when we talk about Earth science as a whole, and also critical zone science, it is very easy to feel down in the dumps about the condition of our planet. What is something that you read recently, or a person that you've talked to recently, or anything like that, that has made you feel hopeful about our planet?

Gosh - my students, every day. It definitely feels like it’s all burning down sometimes, but the best part of my job is definitely getting to be an advisor and a teacher. There are moments where I feel like we’re fighting an intractable set of problems. But it’s amazing to get to work with people that see the system in a different light than I do, and to get to do that every day is pretty remarkable. The thing that gives me the most hope is certainly the students that I work with. Occasionally I’ll hear someone say something like, “you know, millennials”. They probably said the same thing about Gen X when I was young - you know, kids these days. But I’m pretty psyched to think that my students are going to be people that are out there on the planet going forward. I feel pretty good about humanity, which I don't feel good about in the bigger picture of things. But I do feel good about it when I see all the scientists that I work with that are coming up and through, and that includes even undergrads that I get to teach. So yeah, I would say, the most inspiring thing for me has definitely been the students.

There are a lot of things I don’t study. I don't do a lot specifically with climate and climate change. While some of my work is certainly motivated by it, I don't work on it specifically, and so there are lots of things around like large-scale climate models that I think are really cool that I don't work on.

I also work on some hydrologic systems because of their ability to do sort of biogeochemical work, but I’m also not a biogeochemist. So instead I work with biogeochemists, and that has been awesome. Physics makes sense to me: there's equations, there's first principles. Geochemistry has inputs and outputs, and then there's the magic of Gibbs energy in the middle, and I have no idea how they get from one to the other. But she always knows. A close colleague, Alexis Sitchler, was trying to teach me how to make a reactive transport model, and I generated like eight million compounds, and she looks at it and says, “well, obviously these ones wouldn't happen”, and all I could think was “how do you know that?”

So there are a lot of things I don't work on. But climate and biogeochemistry are two things I wish I knew more about.