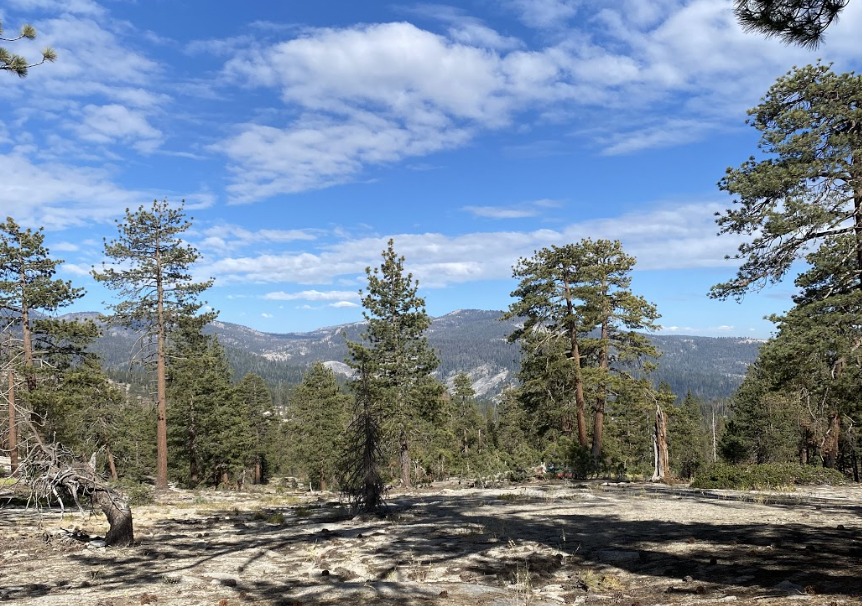 During Russell Callahan’s first field season in California’s Sierra Nevada in 2015, he observed something peculiar.

He was helping another graduate student with field work, and they were working in areas impacted by the massive California drought of 2011-2017, which ultimately killed tens of millions of trees in the Sierra Nevada.

As Callahan’s PhD advisor Cliff Riebe (University of Wyoming) explains, “...it was then that we started to notice that [the drought] response of the forest was not evenly distributed. It was patchy, with more death in some places than others”

The group decided to explore this observation, building on work that Riebe’s students had previously done connecting differences in bedrock composition in the Sierra with changes in vegetation density.

“...we came up with the hypothesis that maybe this patchiness [in forest dieback] was driven by differences in underlying bedrock composition,” he explained

Now, 7 years later, Callahan, with the help of other scientists in the Bedrock Critical Zone Network, has tested that hypothesis and written a scientific paper that helps to explain the phenomenon he observed many years ago.

The paper, released in the scientific journal Nature Geoscience earlier this week, examines the connection between the composition of the underlying bedrock, weathering (breaking down) of bedrock, and dieback of vegetation in the Sierra Nevada during the 2011-2017 California drought. Dieback in this case refers to any negative effects of the drought on vegetation, including (but not limited to) loss of branches, browning of pine needles, or even tree death.

One might think that the sites with more water storage would be able to sustain their trees during the big drought, but in fact, the opposite occurred. Callahan and colleagues found that tree stands in areas with weathered bedrock and high water storage capacity experienced significant dieback as a result of the drought, unlike their counterparts, which remained mostly intact.

Callahan likens this phenomenon to too many straws in a cup; the more trees there are accessing the stored water, the more quickly water will be depleted. And during drought conditions when the water is not replenished, the trees experience dieback. In contrast, the smaller tree stands in areas with less water storage capacity had very few straws in their cup, and were sustained through the drought.

But what larger implications does this paper have? Callahan explains that drought is a continuous problem for the American West that will only become more intense with a changing climate, and hopes that what he and colleagues have identified here will help inform future forest management strategies.

By looking at the subsurface and utilizing this new information, scientists can work with forest managers to identify areas where vegetation thinning or other practices can be used to protect an area from the dieback associated with drought. Callahan is hopeful that this paper will encourage people with different scientific specialties to work together to create a fuller picture of the connections between vegetation and bedrock.

“One of the biggest things that I’ll try to carry with me is to not be afraid to branch out into other disciplines,” Callahan explained, “One really cool thing about this paper is that we have co authors on [it] that include near surface geophysicists, people who do rock physics modeling, and people who think about ecohydrology, and it has been really cool to work with this diverse group of people.”

Tackling interdisciplinary questions like these requires interdisciplinary teams, and Callahan shares that his team members helped make this paper possible. But, as Riebe explains, it was also Callahan’s willingness to dive into a multitude of disciplines that helped the project succeed.

“He had to become a master of multiple trades and despite this staggering challenge, he pulled it off in spades. So he was a perfect fit for the project”

You can find the full paper here, and a News & Views summary by Christina Tague (University of California, Santa Barbara) here.